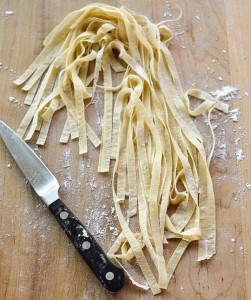 Why do I want do to this? Well,  I can recognize its importance first hand. A favorite memory from my childhood was eating my mom’s homemade noodles. The recipe for which was only in my mother’s brain. It was not written anywhere. At 81, my mother had a stroke. She is unable to cook on her own now but she still knows her recipes.

We were given a chance to capture this recipe and other special recipes before they were lost forever. Now, my kids have made those same homemade noodles from my childhood with their grandma and me. Three generations working together to create a delicious memory. A recipe that would have been lost with grandma will now be passed on to future generations.  They have now become a holiday tradition in our home. By the way, they are just as delicious as I remember them. It is however, a family heirloom recipe that I will keep a secret – at least for now.